San Francisco was first settled in 1854 and named by the founder, William Foster, after the city in California. Foster purchased land along the Minnesota River, divided it into claim lots, built the first store and a warehouse, and tried to sell other plots. In 1955 Carver County was officially declared a Minnesota County. San Francisco was the original county seat of Carver County, Minnesota, but lost that status to Chaska a year later which ultimately caused the demise of San Francisco, Minnesota in combination with the town site being located below a series of rapids on the river which led to poor river travel and frequent flooding. In 1863, flooding washed away a warehouse and several other buildings. Many were not rebuilt as flooding was a consistent problem. When founded, San Francisco's boundaries extended to include the town of Hancock. Residents of this area separated into their own town in 1868, taking their businesses with them. The first school opened 1857-1858 with teacher Levi Williams and 1859 saw the start of a ferry operation across the river. On May 11, 1858, a meeting held in William Foster's warehouse declared San Francisco an official town. Those attending elected town officials such as a Mayor and Justice of the Peace.  Eventually, San Francisco's population dwindled, and the town site became private farmland. In the end, San Francisco lasted for about ten years. 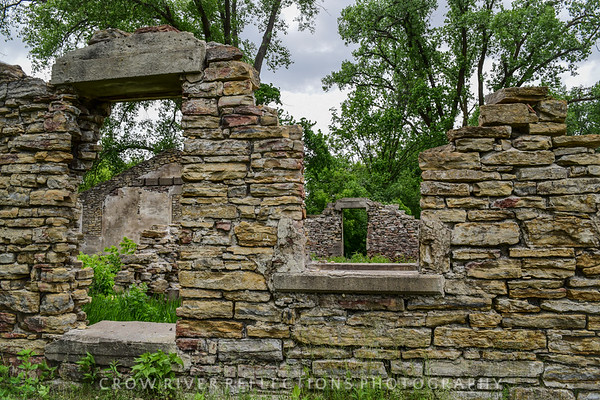 The Archibald Mill was a water-powered gristmill complex, now reduced to ruins, on the Cannon River in Dundas, Minnesota, United States. The mill was founded in 1857 and expanded with a second mill across the river in 1870. It was the first U.S. mill to produce and market patent flour, and its "Dundas Straight" was once considered the best flour in the country. The Archibald Mill is associated with the introduction of hard spring wheat to Minnesota, and was one of the nation's first outfits to convert fully into a roller mill. The first mill in Dundas was built by cousins John Sidney (J.S.) Archibald and George Archibald on the east bank of the Cannon River in late 1857. At the time, the Cannon River had only one channel in Dundas and an 1860 flood caused a split, routing water further east of the mill and creating an island, which still exists today. Across the river was a sawmill, built in 1856 and purchased by the Archibalds for use in constructing their mill. Wooden dams on both channels controlled water flow. The mill used the most current technology available and produced flour of a fine quality. Called EXTRA, the flour was sold for $1 or $2 more per barrel than other local flours. A second mill was built in 1870 on the west bank of the west channel. In 1879 the original mill was completely remodeled. A Hungarian roller system was added and it produced better quality flour at an increased rate. On December 31, 1892, both mills caught fire and burned. The Archibalds sold the site to the owners of the local grain elevator, who rebuilt the mills. A rebuilt mill burned on November 19, 1914. The monetary loss of the fire was $30,000, partially covered by insurance. After the 1914 fire, the Archibald Mill was rebuilt for the final time and later partially destroyed in the early 1930s. The site is listed on the National Register of Historic Places for its national significance in commerce, industry, and flour milling. Today only the foundation of the 1857 mill remains, while the ruins of the 1870 mill stand on the river's edge near a trailhead for the Mill Towns Trail. 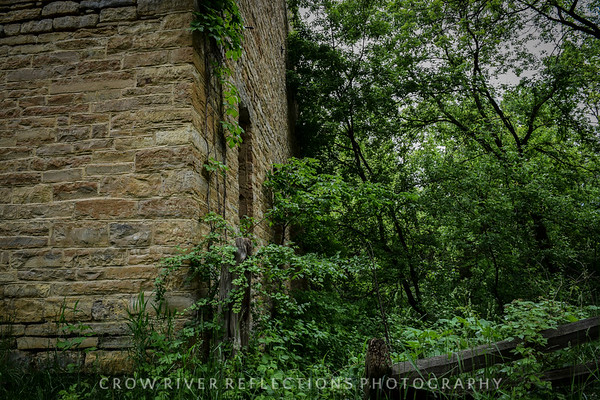 The Oxford Flour Mill, was built in 1878 to replace an older mill across the road, which was built in 1867. Listed on the National Registrar of Historic Places, the first Oxford Mill, built by the milling magnates Archibald and Wilcox turned out a flour that won a gold medal in the Philadelphia Exposition of 1876. In its heyday, the new mill handled 400 bushels of wheat a day and employed 30 to 40 men. It was destroyed by fire in 1905. The Oxford Mill was located on the bank of the Little Cannon River near Cannon Falls. When the mill was built by C.N. Wilcox and John and Edward Archibald in 1878, it was part of the wheat boom sweeping through the state. Annual record yields of wheat generated the need to process the harvests, causing flour mills to spring up along every river and stream. Wilcox eventually purchased the Archibald’s interest in the mill. By 1900, there were twenty-seven flour mills in Goodhue County alone. In the mill’s heyday, it handled more than 400 bushels of wheat per day and employed thirty to forty men. OLYMPUS DIGITAL CAMERA Grain was cleaned at a small building to the north of the main building and then taken by a shaker conveyor to the first level of the mill. It was then moved to the second floor by cup-like attachments on a moving belt. The grain was then dropped from the second or third levels through a shaft to the grinding unit. Depending on how much wheat needed to be ground, the large, undershot water wheel could turn between one to four grinding stones at a time. The bran was then discharged into the river and the flour was sacked. An opening to the side of the west door was used to convey the sacked flour to wagons waiting outside of the mill. Farmers would bring their wheat harvest to the mill and exchange it for flour. Flour from the Oxford Mill would also be taken to Hastings and loaded on boats going to Minneapolis. The mill was gutted by an arson fire in 1905, but the outer walls remained standing. The owners of the mill decided against rebuilding due to the decline in the flour milling industry in the Cannon River Valley. The four-story outer walls of the Oxford Mill were made of yellow-brown Platteville limestone. The mill was three bays wide, and four bays deep. Along with the windows and doors, there were openings for the water wheel, shaker conveyor, and slatted conveyor. Records show that the interior of the mill still shows evidence of the original construction including metal tie-rods and square depressions for the floor and ceiling beams. Outside of the walls, the mill site remains largely undisturbed except for a modern home across the road from the ruins. The site still retains fragments of the original sluice-way, wheel pit, and tail race. The wheat boom peaked in 1879, and the flour milling industry began a steep decline that closed most of the mills by the turn of the century. The Oxford Mill ruin is the best-preserved remnant of the flour milling industry in the Cannon River Valley. It was placed on the National Register of Historic Places in 1980

In the late 1800's nearly 1,000 mills were operating in the state of Minnesota. Otter Tail county was considered a prime location for the construction of mills due to the abundance of water power from the Red River (now known as the Otter Tail River).

In January 1887, William E. Thomas who owned and operated a flour and feed business in Fergus Falls; purchased 37 acres in Section 33 of Maine Township. Running through this land was the Red River with slight rapids, Thomas considered this point a perfect location for a flour mill. He sold his business in Fergus Falls and moved to a log cabin with his wife Nonie. The log cabin sat above the spot on which he planned to build his mill. In 1888 Royal Powers began construction of the dam. The first dam was constructed of wood and had a tendency to leak. Workers often had to use sandbags and loads of gravel, dirt, manure, hay and straw to plug the steady stream of water which gushed through to the other side. The 36' x 30' mill was framed without the use of a blue print or sketch. Powers put the building together without marking a stick of lumber - keeping the whole plan in his head. Construction was finally completed in October 1889 and in December the mill began operation. Known as "The Maine Roller Mills", it was designed to produce 60 - 75 barrels of flour per day under such names as Gold Foil Patent, Silver Leaf Fancy and Bakers Choice. At the height of the wheat grinding season, 25-35 wagons loaded with sacks of wheat would line up outside the mill. Farmers from a distance stayed overnight in the" Farmers Roost," a bunk house Thomas constructed north of the mill. He also provided a barn where horses could be stabled free of charge. In 1895, after grinding more than 44,000 bushels of wheat and 25,000 bushels of feed Thomas decided he needed more machinery and space. As a result, he constructed a 25'x36' addition on the north side of the mill. Covered with sheet iron, the addition was used for the grinding of buckwheat and rye.

After the turn of the century business at the mill gradually declined. Steam, gasoline and electric powered mills were more efficient than water. In addition, railroads made it cheaper to ship wheat to Minneapolis/St. Paul than to mill the wheat in the county. Soon rural mills became obsolete. Thomas sold the mill in 1919 to the Farmers Mercantile Company of Underwood for $35,000. They never made a go of it as many customers complained their flour was not up to the mill's old standards. They sold in 1928 to H.G. Evenson of Wall Lake who offered $10,500 for the purchase of the property. Evenson ground grain for stock feeding on a limited basis. The mill closed its doors in 1939.

William Thomas suggested the name be Phelps, in honor of his wife Nonie's maiden name. The village has been known as Phelps since. There was a general store, which has remained open to the present. By 1900 there was a cheese factory closed in 1920 when the last cheese maker left. Other businesses included a restaurant, a blacksmith shop and a repair shop. These businesses declined as the business at the mill dropped off.

Phelps Mill was listed on the National Register of Historic Places in 1975. 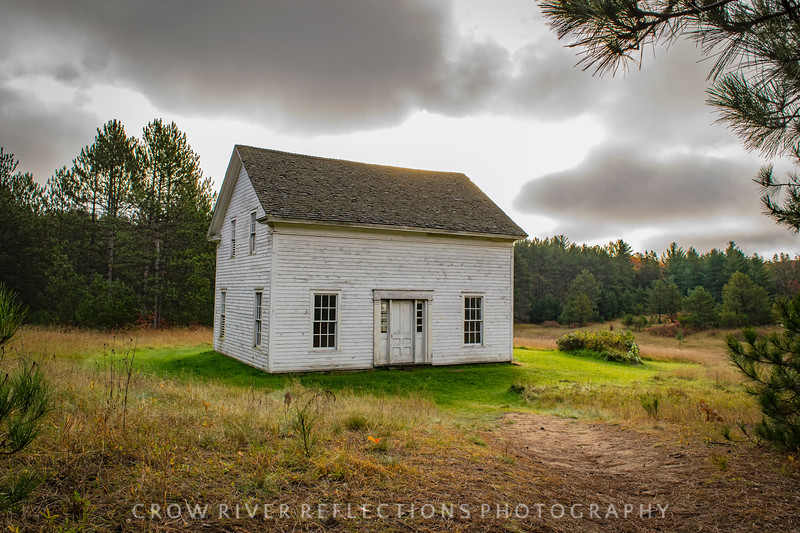 Old Crow Wing is a ghost town in Fort Ripley Township, Crow Wing County, Minnesota, at the confluence of the Mississippi and Crow Wing rivers. Long occupied by the Ojibwe, for over a century it was also the northernmost European-American settlement on the Mississippi.

In the 1850s and 1860s, Crow Wing was a county seat and one of the major population centers of Minnesota. At its peak it had an estimated 600–700 residents, about half of whom were Ojibwe. The town site, including one restored house, which is preserved within Crow Wing State Park.

This area was inhabited by indigenous peoples for thousands of years before the first encounter with Europeans. 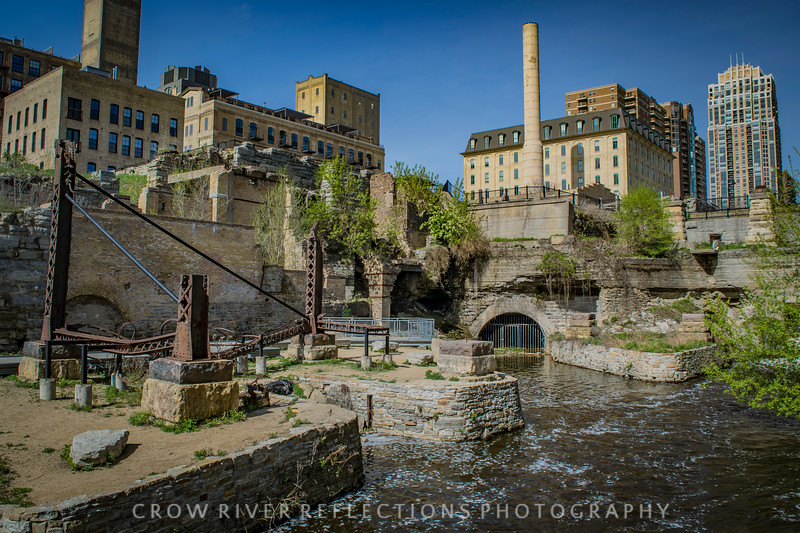 Mill City Museum is built into the ruins of the Washburn A Mill, along the Mississippi River in Minneapolis, Minnesota. The original A Mill, built in 1874, was leveled by a flour dust explosion that claimed 18 lives. That explosion and the resulting fire destroyed much of the riverfront business area, cutting Minneapolis’ milling capacity in half. The A Mill was rebuilt by 1880, with state-of-the-art machinery that permitted safer operations while producing higher quality flour. At the time it was the largest and most technologically advanced mill in the world, featuring new automatic steel rollers instead of traditional millstones. During its heyday, it was said that the mill ground enough flour to make 12 million loaves of bread a day. As technology and consumer preferences evolved, the A Mill became obsolete, and was shut down in 1965. In 1991, it was nearly destroyed by fire. During the late 1990s, the Minneapolis Community Development Agency cleaned up the rubble and fortified the walls. Shortly thereafter, the Minnesota Historical Society announced its plan to develop a museum on the site.